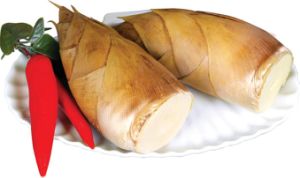 In Indonesia, they are sliced thinly to be boiled with coconut milk and spices to make a dish named gulai rebung. Other recipes using bamboo shoots are sayur lodeh (mixed vegetables in coconut milk) and lun pia (sometimes written lumpia: Fried wrapped bamboo shoots with vegetables). Note that the shoots of some species contain cyanide that need to be leached or boiled out before they can be eaten safely. Slicing the bamboo shoots thinly assists in this leaching. In certain parts of Japan, China and Taiwan the giant timber bamboo Bambusa oldhamii is harvested in spring or early summer. The bamboo has a very acrid flavor and should be sliced thin and boiled in a large volume of water several times. The sliced bamboo is edible after boiling. B. Oldhamii is more widely known as a non-invasive landscaping bamboo.