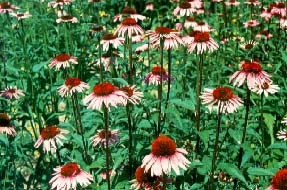 Echinacea is best known for its' immune enhancing ability, but has proven very effective in many other areas as well.The whole plant, but specifically the roots of Echinacea, is highly regarded as a non-specific stimulant of the immune system, as an anti-inflammatory and as an aid in wound healing. Traditionally, it was highly valued as a remedy against various types of infections, in treating poisonous bites of snakes and insects, as a palliative agent in malignant conditions and for its wound-healing properties. It is now particularly used to increase resistance to infections.

Many chemical components have been identified from Echinacea extracts. The immunostimulatory effects of Echinacea preparations have, at various times, been attributed to echinacoside (a caffeic acid derivative), polysaccharides, and alkylamides. The latter compounds are responsible for the tingling sensation produced on the tip of the tongue by Echinacea, especially E. angustifolia root.